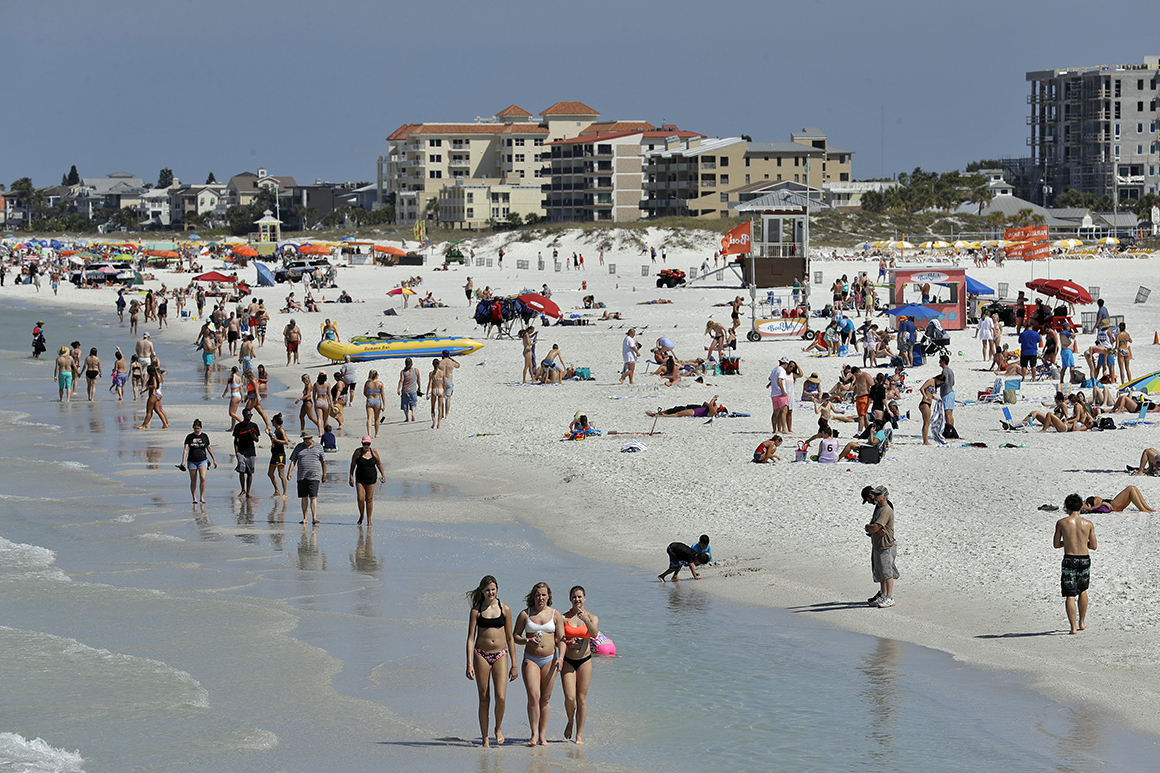 The scenes from spring break earlier this year make college presidents shudder now: Partygoers on the beach in Florida barely inches from their maskless, sweating companions. Jammed lines at Walt Disney World. Students flying back to campus on still-packed flights before state and campus shutdowns kicked in.

“It really taught everybody in the Florida system: It’s not necessarily the safest thing to do to allow students to go off for a week that’s intended to let people relax. Spring break is a big party time,” said Sally McRorie, the provost and executive vice president for academic affairs at Florida State University.

FSU and dozens of other colleges and universities nationwide aren’t taking any chances with spring break in 2021, even though it will have been a year since the pandemic set in. They have rearranged their calendars to wipe out the annual ritual entirely to keep students from their uninhibited and unsupervised sunny sojourns. Any blowback from students seems worth it after the spasms that accompanied reopening in the fall: Many colleges welcomed students into dorms and lecture halls only to have to shift to remote classes after cases surged in a matter of days or weeks.

Boston University took the same step as Florida State. “The rationale is straightforward,” spokesperson Colin Riley said. “We wanted to reduce the likelihood of travel in the middle of the semester and also wanted to retain the scheduled end of the semester so that people wouldn’t need to change post-school-year plans.”

Tallahassee-based FSU is hosting students in person this term, but many classes are online at least part of the time so the campus isn’t as packed as it would be in a typical year. Despite the precautions on campus, hundreds of students tested positive in the early weeks of the semester following raucous off-campus gatherings. Police had to be called to break up one off-campus fete two miles away that involved more than 1,000 people. FSU President John Thrasher and his wife tested positive for Covid-19 last week.

A study by researchers at Ball State University and the New York Federal Reserve linked students’ 2020 travels to spread of the virus in local communities upon their return.

Wiping spring break off the calendar is not foolproof, however. McRorie noted that “there’s nothing saying our students, if they’re enrolled in remote [classes], can’t leave and come back. They can do that anytime.”

Many colleges that did reopen in person for the fall term are shifting to online teaching after the Thanksgiving break, a move also intended to temper spread of the virus. Winter break was extended in lieu of spring break at many schools, so students would stay away for a chunk of flu season, which health experts worry could combine with coronavirus cases to overwhelm the health care system this year.

At Penn State, faculty, staff, students and others conferred before making the call about canceling the spring holiday, Executive Vice President and Provost Nick Jones said.

“A large committee from across the University determined that the best of multiple scenarios under consideration for the spring semester included … a delayed start of one week, and elimination of spring break,” he said.

Penn State and Kansas State University are among those considering adding a different kind of break to the spring term, so-called wellness days. The added days would result in two new three-day weekends on the spring calendar.

“A good compromise can be reached by adding at least two days where students can rewind and catch up on things,” said Tel Wittmer, the student body president at Kansas State University, which also canceled spring break.

“It’s not an easy time,” said Wittmer, who said he contracted coronavirus earlier this semester despite taking precautions and has recovered. He said 35 percent of campus classes are entirely online, a lot of them without live teaching. “It’s hard to manage that in addition to [live classes], on top of jobs and managing what little social life you can have.”

He pointed out that K-State freshmen are having a surreal introduction to college, so any kind of break would be welcome.

“They just came out of this weird virtual ending” to high school, Wittmer said. “Now they’re carrying that into their first year of college.”

McRorie at FSU also said she worries about the many first-generation college students at her university. Then there are students from especially close-knit Hispanic families whose parents live more than a five-hour drive away. Keeping connected by visiting home is critical for them, but so is keeping campus free of the virus. “There are so many things to consider,” she said.

Wittmer’s own presidency has been conducted almost entirely virtually. Elections were in February, just before the health crisis took hold. He took office in April. The student government has met online ever since.

Wittmer does spend time in his office in the student union, which last year was packed with students meeting to study, eat and hang out. A fire damaged the main campus library two years ago and is still being repaired, so the student union bustled with more activity than usual before the pandemic.

“It’s unintelligible to see it today,” Wittmer said. “I think most students understand the public health side of this and understand the sacrifices that need to be made, but it just goes to show the very real challenges that the pandemic’s putting on students’ well-being right now.”

Bloomberg is financing an advertising blitz for Biden in Texas and Ohio.

Overhauls of drug laws are on the ballot in several states that once resisted them.

The 3 Counties in the U.S. That Have Yet to Report a Coronavirus Case

De Blasio to New Yorkers: ‘Do not travel out of state for the holidays’